Welcome, welcome, welcome.  Summer feels like it might be finally here (in the UK at least) and so I’m attempting to push as many new designs out as possible before flying off to Asia for a bit.

Based on that opening sentence, you’d expect me to now give you a list of new designs.  Alas I only have one, but I do have other bits of good news too. Firstly, I have reached over 1,000 sales on my RedBubble store.  I will dedicate a post about this very soon. Secondly, the Cartoon Network have granted me an official license to sell my Samurai Jack design at RedBubble.  This is very exciting because I’m now classed as an official fanart seller and my design is protected!

As for new designs, I do have one to show you.  As part of my stacked console series, I’ve now added Sony to the list.  The first Playstation, the PS1, was released in Japan in late 1994 and 1995 elsewhere.  It was a big hit and was followed by an even bigger hit five years later with the PS2, of which is still the highest selling console of all-time!  Of course the famous story behind the PS1 was that it was born out of a failed joint project between Sony and Nintendo. Originally the two electronic giants were looking to release a CD-ROM based add-on for the SNES, only for Nintendo to stab Sony in the back and side with Philips instead.

As a consequence, Sony decided to take all the R&D and produced the PS1.

There is no doubt Sony revolutionized the gaming industry and made it what it is today.  They were able to expand the market and appeal to adults, whom have much more expendable income than teenaged kids.  With regards to their consoles aesthetics, I don’t think the Sonys ever rank top of the list, although I have always admired the PSP for its premium look and feel.  Despite that, I did enjoy putting this one together and think it does make an impressive image seeing them all stacked up. 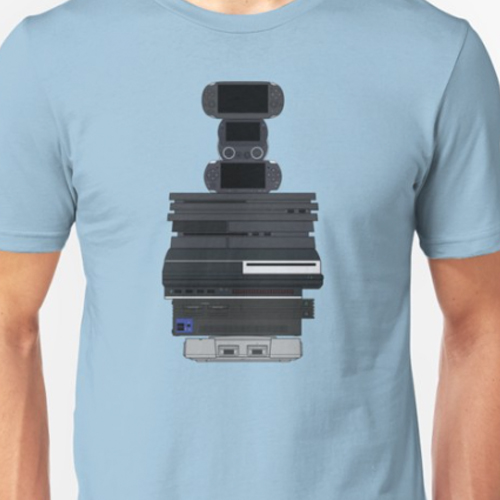 You can see all my t-shirts designs by visiting my t-shirt section of my website (click this link).

You can also directly visit my Redbubble or TeePublic store front by clicking the below links: