For every game console success, there’s at least two stories of doom.  Most of the time this is all too easy to predict, but there are the few occasions that a console’s failure is like a jab in the ribs.  There have been some spectacular disasters, usually by well established companies that should know better, and the old saying that a console is only as good as its third-party support rings very true as the main reason for most of these fails is a lack of franchise games.

Having completed the Sony collection to my console stack series, my attention quickly turned to making one final one (there aren’t currently enough Microsoft X-Box consoles to justify one), this time the focus being on failed consoles from the last 30-odd years of gaming.  It would be fair to say that I have a mild obsession with failed consoles. This might be down to having vivid memories of their launches, living the hype and excitment, and then seeing them quickly reduced in the bargain bin.

The one that I seem to be most obsessed with is the Atari Jaguar, released in late 1993 in North America and 1994 everywhere else.  It launched with quite a bit of hype as it was marketed as a 64-BIT console when, at the time, 16-BIT consoles were all the rage. So to jump from the 16-BIT era straight to 64-BIT seemed crazy!  Indeed it was because the 64-BIT claim was a bit of a fib. Without getting too technical, it had a 32-BIT CPU and GPU (code named Tom & Jerry), which worked together to send signals to a 64-BIT graphics processor, so 32 x 2 = 64, yes?  The reality was the console didn’t quite perform like that simple sum, despite its marketing tag line being ‘Do the Math[s]’, and that wasn’t the only technical issues Jaguar owners encountered.

Back then I was none the wiser to these claims because one of the consoles launch titles was Aliens Vs Predator; a first person shooter that gave you the choice of playing as either an Alien, a Predator, or a Marine.  This was mind blowing, and the game just looked soooo good.

I remember entering competitions to try to win one, perhaps subconsciously knowing to actually invest in one would be stupid.  I wasn’t successful but a teenaged boy could dream. A year later the Sony Playstation was released and the Atari Jaguar became a distant memory, although I recall walking into a Virgin Megastore and seeing them being sold dirt cheap and was quite tempted, but sadly I didn’t part with my cash.

Despite its many flaws, there’s still a lot to admire about the console.  It was powerful, it looked good, it had a cool name and logo, the control pad had a ridiculous amount of buttons and was painful just to look at, and best of all they had the audacity to release a CD add-on to try to extend it’s already very short life span.  It wasn’t until very recently that I found out they’d even released a Highlander game for it, based on the cartoon TV series. I strongly urge you to check out this YouTube video on it, just to see how bad it is: https://www.youtube.com/watch?v=dwdo8uh3W5M&t=765s

Nowadays the Jaguar does have a cult following, thanks to Hasbro Interactive (who bought out Atari in the late 90s after financial struggles, thanks largely to the failure of the Jaguar) making in an open source platform and allowing homebrewers to have some fun.  As a consequence, the console is actually quite pricey to buy from the likes of ebay, which I’m quite pleased about but now regret even more not buying one when they were practically being given away.

The other failed consoles that appear in my stack include the Panasonic 3DO, the Apple Bandai Pippin, the Amstrad GX400, the Atari Lynx and the Nokia N-Gage.  All these consoles could have their own story, and of course there have been many other failures that could cause a tear or two which include the Sega Saturn and Dreamcast, the Nintendo Virtual Boy and WiiU, the Amiga 32CD, Philips CD-I, Gizmondo………

My Console fails design can be found at my Teepublic store, which you can access by clicking here. 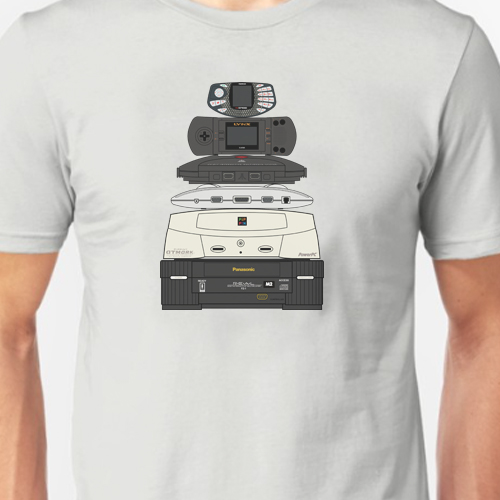